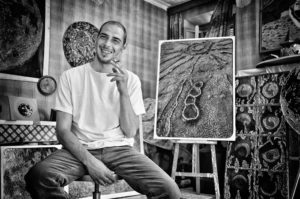 I live and work in Fiuggi, home of the “lunificio”.
After a beginning of unfettered experimentation with materials and colours, I developed an interest in textures yielded by exposure to sunlight on paintings.

In the 1990s I worked in the studio of designer Giuseppe Martini. As a designer, I craft and sell technical designs for fabrics in America and Europe- this is how I started incorporating computer design in drawings.

In the 2005 exhibition: “Tutti i colori del sacro vuoto” (“All the colours of the sacred void”) at the “Slongia pub” in Fiuggi.

In the 2009 collective exhibition: “Multimediale” (“Multimedia”) at the “Officina della Memoria e dell’Immagine” in Fiuggi.

From 2009 to 2012 I participated in the works “Monumento al caos” (“Monument to chaos”) and “Scultura abitabile” (“Habitable Sculpture”) by Maestro Piero Fantastichini from whom I learned the concept of the “Star Sign”, the use of resin, phosphorus and perfecting the technique of digital drawing.
In 2010 I accomplished “Requiem K 626”, a glass microsphere sculpture; in 2011 I accomplished Digimoon in approximately three months of daily computer work: The concept of the lunar portrait is born.

From 2012 to present I have been working on a series of works on “la Luna e il Segno” (“The Moon and the Star Sign”).

In 2014, the first 25 lunar portraits were united with their respective owners at an outdoor garden: “un incontro inatteso di lune” (an “unexpected lunar meeting”) as a dedication to the girl who had commissioned lunar portraits number 26, 27, 28 on the same day.

In 2017 I participated in a short film entitled “Il laboratorio dell’arte” (“The Art Lab”), in which I play “La quarta luna” (“The Fourth Moon”).

July 2017 I was entered by Vittorio Sgarbi to be among eighty other finalists for the “Milan International Art Award” at the “Dal Verme Theatre” in Milan.

March 2021 Hosted as artist in residence at the “Fundación Canaria Gernot Huber” in Tenerife I create “A new Moon” sculpture in the round with a diameter of 1.5 meters.

Currently I divide my time between lunar portraits, a purely informal study of the Star Sign with the IHSV Series and the creation of a “lunar chessboard” 150 cm in length.

The Lunar Portrait is based on the unchanging repetition throughout time of lunar cycles; any past or future date can be linked to one... and only one... particular lunar phase. This feature of our satellite, with the addition of the recipient's initials as well as the unpredictability of the sign and oxidation, ensures the uniqueness of each piece, even if made using a single pattern.